Feeding the Young Broiler Chick in Practice: A Review by RIick Kleyn (1) and Peter Chystal (2) 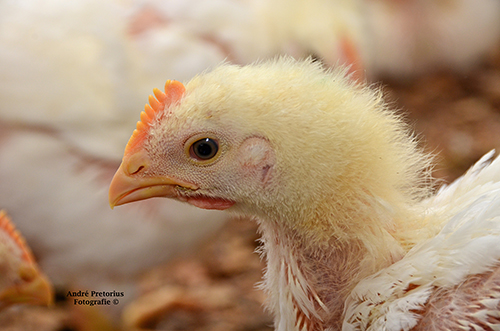 Modern broilers are reaching market age sooner each year. The attainment of a good 7-day weight, together with good uniformity, is increasingly important. These goals can be achieved if the nutrition and management of broiler flocks are viewed as a single entity. The improvement in the nutritional status of the young broiler is dependent on a number of mechanisms, all of which rely on the bird metabolising adequate amounts of energy and other nutrients. This practical review offers an overview of this complex topic. It deals with the practical aspects of feeding the young broiler to achieve the desired performance objectives. This includes discussions on feed specifications, feed ingredients and feed additives. The economic aspects of the various methodologies are considered.

Feeding the broiler during the first week of life represents a challenge to nutritionists and flock managers. The young broiler (chick) has yet to develop from both physiological and anatomical perspectives. The weights of the gizzard, proventriculus and small intestine increase more rapidly in relation to body weight than do other organs. This enhanced growth rate reaches a maximum between days 4 and 8 of age. Liver weight increases twice as fast as body weight during the first week of life (Noy, et al., 2005). The first week represents an ever-increasing proportion of the broiler production cycle. A good start leads to a uniform flock of chicks with a good 7-day weight, which is correlated to the slaughter weight of the birds.

Hatch represents the time when the chick must make the transition from the energy supplied by the yolk (endogenous) to the utilisation of exogenous carbohydrate-rich feed through the intestine (Noy, et al., 2005). The chick is immature with regards its development as follows:

Anatomy and function of GIT: At hatch, the enterocytes are round and immature. Development results from an increase in villus height and density and through the maturation of the enterocytes. Enzyme secretion levels are low. Access to nutrients initiates development of the GIT lining and increased enzyme secretion.

Hepatic System: Chicks have an immature entero-hepatic circulation of bile salts and low lipase synthesis, resulting in a lower capacity for digesting fat.

Development of GIT microflora: Microflora colonise the GIT post-hatch and form a synergistic relationship with the chick. They alter GIT physiology, impacting on nutrient uptake, the response to anti-nutritional factors and the immune system.

Batal et al., (2002), showed that the ability of the chick to digest energy and amino acids is compromised for at least the first week of life. How then do we best feed the chick, to maximize the development of the GIT and immune system, achieve a good 7-day weight and still make money? Little precise data is available on the nutritional requirement of the broiler chick during the first week of life. However, enough is known for us make changes to our production systems which will result in improved performance. These all involve ensuring that the birds consume and metabolise as much nutrient as possible.

Feed and Water Intake: The most important enhancer to chick performance is adequate consumption of feed and water. Water and feed intake co-dependent (Ribeiro et al., 2005). On farm, the correct ventilation, brooding temperatures and early access to feed/water are critical. Pay attention to the particle size of ingredients as well as the physical form of the diet itself. Particles should not be too coarse; neither should it be to fine. Krabbe (2000) has shown that particle size should be between 500 and 600 μm for the first 7 days of chick life. Feed chicks a uniform crumble, between 1 and 2 mm in diameter. Alternatively, use a mini-pellet ensuring that they are not too long. Minimize the level of fines in the diet.

Dietary Nutrient Specification: Plumstead et al., (2007) demonstrated that chicks respond to balanced protein, containing a fixed proportion of the dietary crude protein to essential amino acids, in a linear manner. Thus, we need to decide what level of balanced protein acid will give us the best return. Wijtten et al., (2004) fed enhanced dietary ideal protein levels in the starter diet of broilers, which increased the body weight gain in the starter phase and subsequent lifetime performance. Any delay in body weight gain brought about by suboptimal ideal protein levels in the starter diet, could only be partially compensated for in later phases of life. This complicates any decision about protein levels in chick diets.

The choice of energy level in chick diets is less clear. Vieira et al., (2006), increased the energy level of the starter diet by adding oil and were able to demonstrate that in the range 12 to 13 MJ of ME/kg there were no significant differences in feed intake, weight gain or feed conversion ratio. This finding is similar to that of Plumstead et al., (2007) who maintained consistent fat levels in diets in the range 12.5 to 13.4 MJ of ME/kg. These data would suggest that feed consumption is controlled by protein requirement, or alternatively, the birds’ physical capacity to consume feed and not necessarily by energy requirement or energy levels of the diet. Hence, the energy level of chick diets is probably relatively unimportant.

Sodium (Na) plays an important role in chick nutrition. Na promotes the absorption of both glucose and methionine, as the absorption of these nutrients is Na Pump dependant. In addition, Na stimulates water and feed intake. Weight gain is maximized at higher Na levels than traditionally used (Maiorka et al., 2004).

Our knowledge of the vitamin requirements of chicks is scant and possibly outdated, with most recommendations covering the period 1- 3 weeks of age. Hubbard Breeders, (2006), published recommendations for the chick that are higher than those in general use. It is unclear if this recommendation is based on research or conjecture.

Choice of ingredients: Address ingredient choice for chick diets from the perspective of maximizing nutrient availability, rather than simply meeting published energy or amino acid levels (Ravindran, 2005). High quality/purified ingredients such as yeast, sugars or milk solids, may be used, but are all relatively expensive. Practically, there are simpler and cheaper ways to achieve similar results. All ingredients used in chick diets must meet quality control standards, with regards their appearance, taste, smell and physical form. Use ingredients low in moulds and free of mycotoxins, as young birds are the most susceptible to mycotoxicosis.

The grain used in chick diets is important. Ao et al., (2004) measured the relative gain and variability of chicks fed diets containing different grain sources and found that maize and sorghum led to heavier birds that were less variable. Applegate (2005) contends that maize contributes a large proportion of total fibre in the diet, with the hull and germ fractions contributing 51 and 16% respectively. These fractions may be removed by dry milling to produce de-hulled, de-germed maize (DDM). Feeding of DDM to chicks resulted in a significant improvement in weight and apparent dry matter retention at 17 days of age. Moritz et al., (2005) processed maize by either pelleting or extruding it, thus increasing its level of gelatinsation. Neither pelleted nor extruded maize improved dietary AMEn or feed conversion. However, it did increase live weight gain when compared to the control. It is believed that this was in part due to increased feed intake.

Soybeans are a major protein source in most chick diets. They too contain fibre, mostly in the hull of the bean. Ribeiro et al. (2005) showed that using soybean meal higher in protein (lower in fibre) resulted in the higher feed intake, weight gains and feed conversion.

Machado et al., (2003) showed that soy oil was superior to soap stock oil in chick diets. Both of these sources were less digestible when compared to the older broiler, suggesting that feed energy for chicks should be supplied as carbohydrate rather than fat, as fat is poorly utilised.

Use of Feed Additives: A broad range of feed additives is available. Their importance will increase as the use of antibiotics becomes restricted. They fall into a number of classes:

Alter the GIT microflora: Probiotics are live microbial feed supplements, which improve the intestinal microbial balance, exerting health benefits beyond inherent basic nutrition. Viable microbial cultures (Lactobacillus etc.) are used to populate the GIT with “good” bacteria to the exclusion of other organisms. Prebiotics, defined as non-digestible food that beneficially affects the host by selectively stimulating the growth of one or a limited number of bacteria in the colon. Organic acids have an impact on increasing acidity of the gut, stimulating acidophilic bacteria (Lactobacillus) and inhibiting growth of acidophobic bacteria ( Campylobacter).

Enhance nutrient uptake: The inclusion of enzymes in the diet ensures that residual nutrients are available to the bird and not the microbial community.

The chick is not simply a “small” broiler. It has unique requirements not only in terms of its management and care but also in terms of its feeding and nutrition. Using current knowledge, broiler performance can be significantly improved. There is room for further investigation. This should include supplementary feeding of chicks in the hatchery, either by means of in ovo feeding or in the hatcher trays; more work on the nutrient requirements of chicks; a better understanding of the organisms that make up the GIT microflora; which enzymes work specifically in chick diets; and which non- nutritive feed additives are efficient and cost effective.

Noy, Y. and D. Sklan, (2005). Management of early nutrition and its effect on gastro intestinal and broiler development. Poultry Beyond 2010, Auckland, NZ.